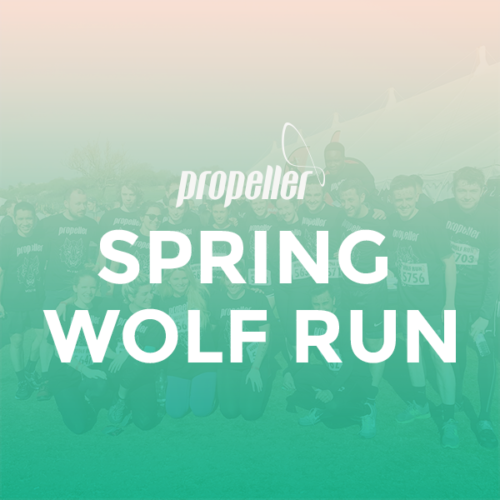 10km, 20 obstacles, a few bruises later but we live to tell the tale.

On Sunday 9th April, the London and Rugby office joined to form the Propack– a gutsy, courageous and fit group of 30 (or some may say “lambs to the slaughter”). The journey up to Leamington Spa was filled with excitement and optimism, which was added to by beautiful weather. The team had been training for months and whether they were readier for the obstacles or a drink in the sun after, everyone came in high spirits. Now surely this should be a walk in the park?

The Wolf run is the only wild run in the UK, and involves a unique combination of mud runs, trail runs and obstacle runs over 10km to test you mentally and physically. We tackled a series of man-made and natural obstacles having to run, climb, jump, wade, crawl and swim through a series of hurdles, challenging us to our peak fitness.

For the months leading up to it, everyone was fundraising and getting themselves in good shape. The team assembled at the registration point, where we received our numbers and the reality of what we had got our self into was becoming more real. The organiser had set up video footage of the previous days run- people head to toe in thick mud. Eyes darting around the group “Is it too late to turn back?”. Before we could entertain the thought, we were in a military style warm up, army crawling on all fours. This was followed by burpees, high knees and stretching. Propack was ready.

As the Propack lined up at the starting line, the gun went off, any doubt soon faded. The high spirits and camaraderie was unquestionable as people of all ages, shape, size and fitness were running alongside you, helping you out. The Wolf Run itself wasn’t timed, but more a ‘run’ rather than a ‘race’. The organisers wanted everyone to get 100% into the obstacles and team spirit rather than feel they were racing against the clock.

Highlights of the race included:

Starting the race off were a series of tyres on the floor you had to hop in and out off. There were two techniques you could have used: Walking over the rim of the tyres or hopping in and out. The tyres weren’t as firm as first anticipated, so this required a level of balance and coordination. After this, there was a final larger row of tyres to climb over. Some hurdled this, others and others chose the “rolling” method over the tyres – each for their own.

By the time we came around to the Lake, things were starting to warm up. Thankfully it was a warm spring day, and the beginning fast pace of the run along with some challenging obstacles started to get everyone warmed up. What is that you hear? Water? The lake walk was a great refresher until you realised, you couldn’t just dip in. We then had to wade through 15m of deep lake water, dragging our trainers with us.

After coming out of the Black lake, everyone was drenched. This was followed by various smaller obstacles including running through slippery mud and submerging yourself in a mud bath. We were then approached by a camo net, which you had to army crawl under, through a shallow pool of mud. By this time, everyone wondered have they ever seen so much mud in their life? Despite this, enthusiasm was still high and everyone was raring to continue.

If you have strong negative feelings about small spaces – this isn’t your obstacle. We approached and saw that there were several pipelines, just big enough for an average sized man’s shoulders. You then had to slide through, pulling yourself forward with your arms. The movement resembled a worm, as there was no space to kneel or stand.

The Lake swim has become notorious in the racing world as one of the most challenging long mid-race swims. And boy, it was difficult, really testing everyone that went through and completed the 80m swim. The lake has lifeguards on the side, as well as lifeguards in canoes circulating the lake. The reason for this, is when you go into the lake, the sub-zero temperatures catch your breath, meaning you then swim the whole lake in a restricted doggy paddle. Of course, in colder months this would be Baltic. The sense of achievement when you get out of the lake can’t be beaten.

Highlight of the run. As you approach the hill, you know what’s coming. A 30m slide down a steep hill. As you throw yourself down, the wind in your hair, head up, arms out to the side, you gained a fair amount of speed. You kept going until you then met a pool of water. After the slide, spirits could not be more positive as everyone approached the home straight.

Of course, to then finish the race off, a mud bath was awaiting your arrival before crossing the finishing line.

We can agree the Wolf Run was tough, and tested every one of us that took part, but it wasn’t so bad – in fact everyone loved it and couldn’t recommend it more!

We did this while raising awareness of two incredible charities: Cancer Research UK and Macmillan Cancer Support. Who help reduce the number of deaths from Cancer, through prevention, diagnosis and treatment of the disease. As Cancer affects 1 in 3 people, it’s one of the hardest hitting diseases affecting not only the victims themselves but also friends and family. As a team, we are truly honoured to be representing such amazing charities that do incredible work to support Cancer patients and their families.

A huge thank you to everyone who helped us raise an enormous £3,789.24 in support of our two incredible charities, it’s not too late to donate