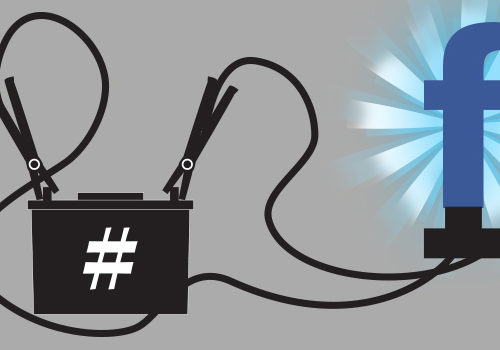 Facebook users will soon be able to group comments on the same topic by typing the hashtag alongside a keyword at the end of a post. It will allow ideas to be organized and searchable by other users of the social networking site. Facebook was previously seen as the social network, however now with the ever increasing presence of platforms such as Twitter, Instagram and Tumblr – Facebook needed to adapt to people’s shorter and more visual messages, and through the use of the hashtag they are able to encompass this change in attitude amongst the current stream of social networking.

With Television becoming an increasingly interactive medium for key events, sports and global events like the Olympics and major elections. Hashtags allow anyone with a Twitter or Facebook account to take part in a universal conversation about a group topic. Media companies and advertisers alike are harnessing the power of hashtags, generating large-scale exposure and potential business at an ever increasing rate. See more on the hashtag at http://sendible.com/insights/hashtag-power/#ixzz2WlnMp300.

Facebook will be able to steal traffic from sites that already use hashtagging. Many people share tweets or Instagram photos that include hashtags on their Facebook pages, alongside their Twitter and Tumblr accounts. Now that these tags will be clickable on Facebook, users will be redirected to a feed that aggregates that topic within Facebook itself – showing global trends and topics.

This advancement in social networking – a unified system organising multiple pieces of information across social network sites means great things for our clients. E-commerce sites, selling either the latest shoes or the trendiest kitchen utensils – they now have a much wider reach. Alongside this they also have access to the tools that can not only advertise on a large scale, but also bring in customers who are fans of the brand to undertake their own form of social advertising – benefiting both the company and also those connected to each other on Facebook. The same applies to the Hospitality Industry – it is a well known fact that many people regularly upload photos of their food on Instagram, and these photos often get shared across the entirety of peoples’ social networks, so our clients will be able to take full advantage of this by increasing not only brand awareness but also potential revenue from people trying out their products they saw on Facebook.

It’s not all perfect however. There are still question marks over user’s privacy, the effectiveness of hashtags in a community that is getting more and more restricted by people’s increasing knowledge of privacy restrictions and whether hashtags within Facebook will be as well integrated as they are in the other social networking sites.