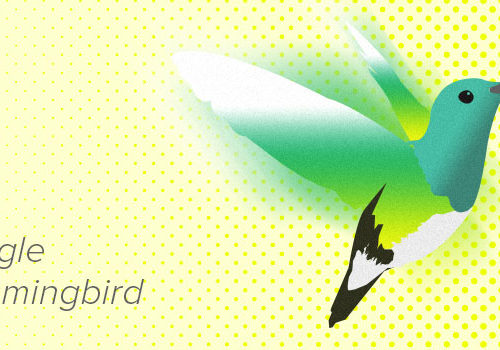 Last month saw Google celebrate turning the ripe old age of fifteen, with the release of its most major search engine overhaul in over ten years, which of course, in the worldwideweb – is kind of a big deal.

Introducing the Hummingbird – Google’s most evolved algorithm to date.

The Hummingbird Algorithm is the procedure in which the search engine interprets data and then ranks based on relevance to the search term. In a dramatic shift from tradition, the new update ranks search results based on the semantics of the search term, rather than the keyword data.

Admittedly, it’s not quite as extreme as the ‘butterfly effect,’ yet the Hummingbird is still set to have a hugely significant effect on the way in which we use search engines.

Unsurprisingly, the way in which we use Search Engines has evolved considerably in the fifteen years since Google first arrived on the scene. Google searches terms are becoming more and more conversational; as users have developed a tendency to ask questions rather than enter simple key words – and this Algorithm is Google’s effort to produce results that most efficiently respond to this shift in user search terms, in order to deliver rankings that best answer the user’s questions.

Another reason for the evolution of Google’s search algorithm is to prevent large companies from dominating search engine rankings by using generic key words associated with their business. Now, this ‘fluff’ content, tailored solely to guarantee high SEO is being filtered so that smaller businesses are increasingly able to compete in the war for rankings, all thanks to the arrival of the Hummingbird.

Another major aspect to the search engine overhaul, which will more than likely cause alarm bells for businesses, is that search results now appear directly on the search page, ‘scraped’ from sites containing relevant information, as opposed to directing traffic to the actual site.

The goal – to generate an all inclusive search engine experience.

Since its release over a month ago, Google have told us, search results have already improved and this is set to get even better as sites are being forced to be more detailed and specific in their metadata. Instead of using key word data to drive search engine traffic towards their site, businesses now need to really think about what their potential customers/visitors are looking for, and in turn, how they might search for it, semantically.

Here is a pre-Hummingbird example of how the Search Engine would respond to a query about an I phone 5:

Where can I find the best deal on an Iphone 5?

Traditionally, the search engine would have focused on the key words underlined and displayed the results most relevant to these (i.e not necessarily the best deal – just a deal, probably from the most generic service providers)

Now, thanks to Hummingbird, Google will focus on the user intent in an attempt to answer the question most effectively:

“Where can I find the best deal on an Iphone 5?”

Google will utilise past information you have shared, i.e your local area – and use this to generate results based on the best deal on an Iphone that’s local to you.

What this means for smaller businesses:

In order to get your site to the top, ‘Words on a page’ simply won’t cut it anymore. Now content really has to answer for something in order to appear highly in the ranks, meaning Content Strategy needs to be higher on the agenda of business marketing objectives.

Ultimately, in driving out ‘fluff’ SEO content, smaller businesses will have the opportunity to compete by using Meta data that correlates to what their potential customers might be looking for. In turn, improving their position in the Google ranks.

To benefit from the new Google search standards, smaller hospitality companies need to rethink how customers are using the internet to find products and services, with the reassurance that their efforts will be rewarded. This can be achieved by:

  -Considering as many queries as possible and how they might be expressed in the user search. Then Including as many terms close to natural, conversational language as possible

  -Responding to longer search queries as questions, as opposed to keywords and data

A user looking for a Yoga mat in Richmond may phrase their search as follows:

Instead of compiling rankings based on keyword matches, the Hummingbird automatically responds to what the user may have intended:

“What is the best place to buy a yoga mat near my home?”

Hummingbird update means that Google results will be tailored to the literal meanings behind these words (place, home). For instance, the search engine may recognise the user ‘home’ to be Richmond, if you have previously shared this info with Google. Additionally, Google may recognise ‘yoga’ as a specific type of exercise, offered by a certain type of store.

The Dark Side and the Solution

‘The Google Only Experience’

Now so much information is readily available on Google’s search page in an effort to promote a ‘Google Only Experience’, inevitably reducing traffic to other sites, it may seem incredibly detrimental to smaller businesses but actually, if enough effort is made to reallyanswer user search queries, this is Hummingbird giving smaller companies the chance to shine.

Although, this does means companies will need to invest more time and energy into content marketing, the Hummingbird assures that such an investment will be worthwhile – so that visitors will be drawn time and time again to their site for something that cannot be offered by the search engine!